Last weekend brought us the Great Ireland Run in the Phoenix Park. It also incorporates the National 10k so there are typically some big names in the field. It’s not a course for the faint-hearted, taking in such delights as the S-bends, Glen road and a climb out of the Furry Glen before a finish into the wind up Furze road. Lovely.

27 CSHers lined up on a wet Sunday to race. Must have been all that talk of fresh scones. Or pints.

The ladies race was up first and, as usual, hopes were riding high for Ashley “The Rocket” Ryan, who has been smashing PBs and taking podium finishes left, right, and center. Looking right at home among the pack of leading ladies, Ashley cruised home in an impressive 36:54 leaving her 8th overall and 4th SenW. Fantastic running as usual from Ashley and how inspiring to see the club shirt among the elite athletes. 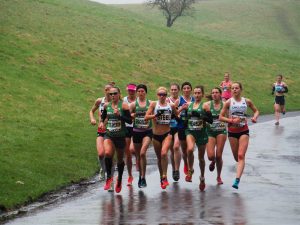 There were strong performances also from Siobhan O’Carroll who finished in 42:26 (8th F40), followed by the ever-solid Brid Ryan in 42:57. This put the ladies team in 6th position overall. Well done girls!

The men’s race was up next with Patrick Coyle first home in 35:53.  A great run from Podge on a tough course. Next home was Gareth Horgan who was looking for his first sub-40 10k. He made it look easy by finishing in 38:49. Who said this wasn’t a PB course?!

Sean Ryan finished in 38:57 placing him 4th M55. Great running from Sean. Paul O’Neill also came in under the 40 minute mark, finishing in 39:05. Keith Farrell took a breather from his half-marathon tour to finish in 42:41, another massive PB! Next home was Marius Crisan in 47:39. Great runs also from Brian Boland, Sunil Singh, Declan Gavin, Maurice McCartney and David Byrne.

Next race on the calendar is the Tallaght 5k. Entries available here. It’ll seem easy after that race!